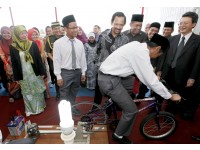 At an alternative energy exhibition, students from energy clubs in various schools in Brunei were set a task to come up with ideas that incorporate green technologies such as solar- and hydro-electricity. One of these was a project called “Family Fitness For Energy”, created by the energy club of Menglait Secondary School. It shows how kinetic energy can be turned into electricity using an old bicycle that can provide electricity to power a fan, radio,and lightbulb. When the person pedals the bicycle, it turns the chemical energy (inside the body) into kinetic energy which is then converted to electrical energy.

Those attending the exhibition included the Sultan of Brunei, Energy Minister Pehin Datu Singamenteri, and Ken Kobayashi, President and CEO of Mitsubishi, who gave encouragement to the students. A project of this kind is a conversation starter on how to make use of use new technologies. Its success will be depend on many things, including whether Bruneians can be convinced to adopt a more active lifestyle. The emphasis on this as a family activity is a good start. Perhaps the added benefit of new energy sources will be enough to convince them?