Bubble tea! You can find it everywhere in Jakarta with long queues in front of shops. But what is actually in bubble tea? Why are many Jakarta people willing to waiting in a line for one hour? And what is it doing to your body?

These shops only sell Bubble tea (also known as Boba tea). Bubble tea is an East Asian drink that was invented in the 1980’s in Taiwan. These drinks, containing tapioca pearls (Boba), have become so addictive that people are constantly craving it and would be willing to wait up to one hour in line to drink it, as well as battle traffic for another hour to get there. The difference between Bubble tea and white coffee which also popular iis you can customise your own drink, from choosing your preferred type of milk, choosing your own topping, and choosing a wide range of flavors, like taro, matcha, lychee, guava, strawberry, cheese, yakult, chocolate and matcha. What other drink provides this many interesting flavors?

Peter Huang provided a comment on Quora answering the question, “Why is Boba tea so popular?” He said that the Bubble tea comes with hundreds of varieties in color and flavor so people will never get bored of it. Dee DJ agreed with Huang, saying “Bubble tea has so many different flavors plus the boba makes it more interesting, I guess it’s very interesting to have something to chew on while drinking a beverage”.

The obsession with Boba does not stop there, it is also appearing in food. There’s Boba fluffy pancakes, Boba tart and you can also eat Boba tapioca pizza. It proves how obsessed people are with Boba.

How did people in Indonesia become so obsessed with Bubble tea? Indonesia already has many other sweet drinks and desserts, such as es cendol,  es doger, etc. Why do people keep coming back for more Bubble tea? The answers are provide lessons in behavior change and emotion-based marketing. 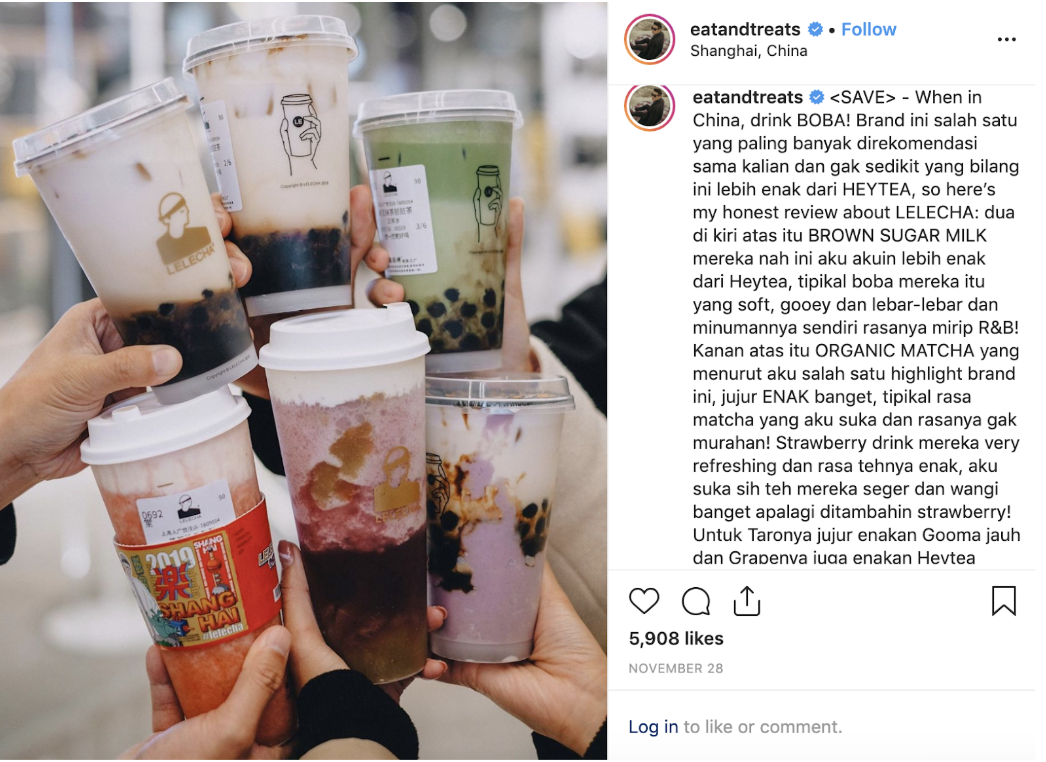 The crazy demand started from social media, especially when millions of people watched about Bubble tea on YouTube Video by Chinese-American brothers Andrew and David Fung and Bubble tea became popular in Japan when Matsuko Deluxe featured it on his television program. Popular culture from east Asian countries like China, Japan. Taiwan and Korea is already imported into Indonesia due to its emotional desirability and cultural similarities. People then started to drink Bubble tea because of its  aesthetic appeal – it looks great in their photos. Then people then start to buy Bubble tea for their social media content – to be seen to be up to date or kekinian. With influencers on board, demand for Bubble tea increased rapidly. Many people, especially teenagers, want to copy the (influencer) lifestyle. Youtubers also started doing live taste tests and reaction videos. Bubble tea gained even more popularity until almost anyone will line up for a Bubble tea.

The effect of Boba tea 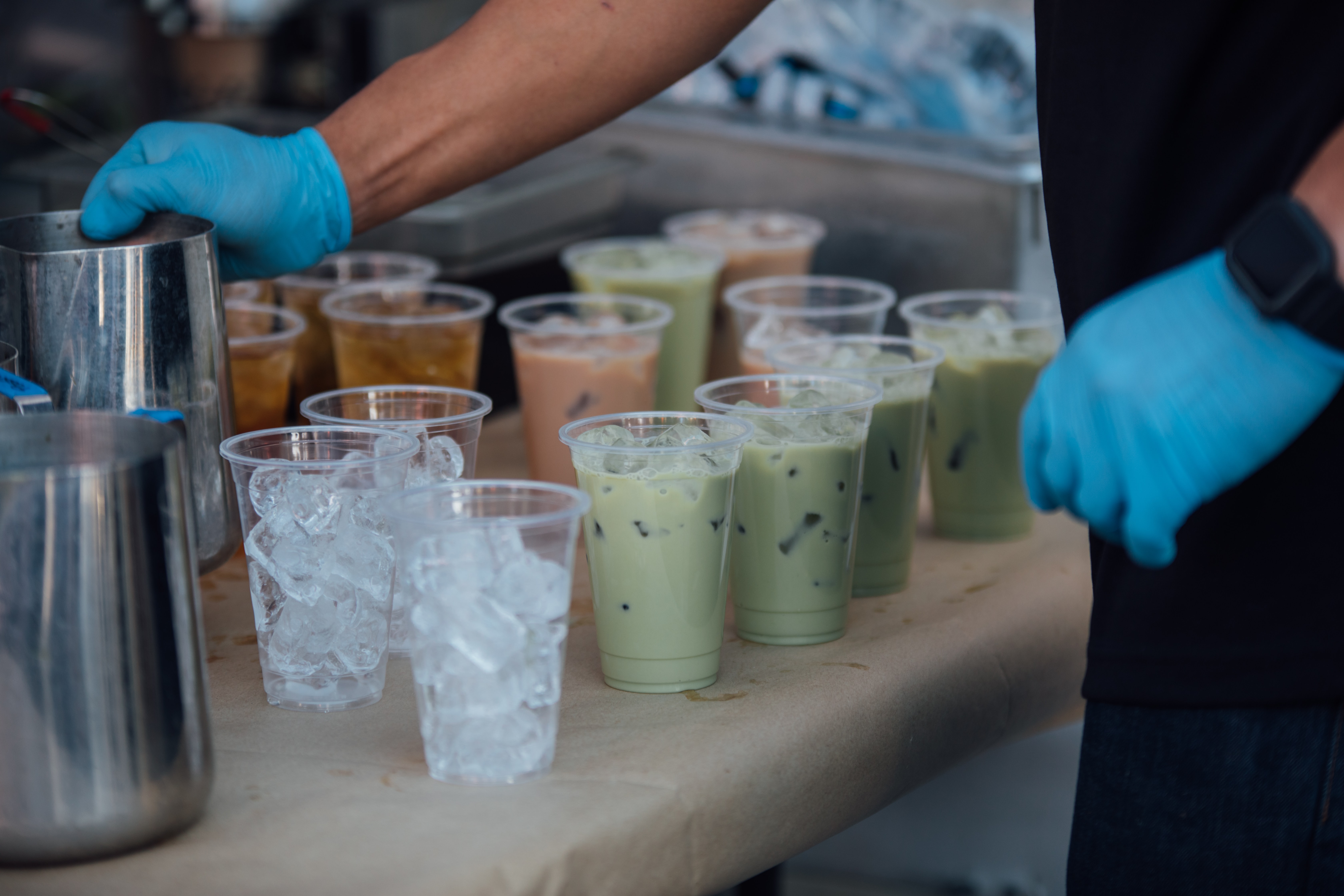 Criticism began appearing inreports on the growing problem of the amount of plastic cups and straws used for Bubble tea, causing it to become  a big contributors to plastic waste. In one outlet in Grand Indonesia Mall 247 boba tea drinks are sold every seven hours which means there’s 247 plastic cups that become waste. Many malls in Jakarta have 7 to 8 outlets selling Boba tea. With dozens of malls in Jakarta and many more in other cities, the plastic problem is only going to get worse.

If you think only middle class people can buy boba tea, that’s wrong. In smaller cities, like Depok, Tangerang or Bogor, there are many small boba tea stalls. They have a variety of toppings like cheese, popping boba, egg pudding, chia seeds and more and these are very popular, because the price is cheap and affordable.

Imagine how much plastic waste boba tea produces every single day. Many of the plastic cups are just thrown onto the ground. Based on data from Plastik Indonesia (INAPLAS) and Badan Pusat Statistik (BPS), the total plastic waste produced in Indonesia has reached 64 million ton/year. Bubble tea is part of a plastic intensive, high disposal lifestyle.

Obesity, diabetes and heart disease could soon haunt Bubble tea drinkers. How? Bubble tea includes cooked tapioca pearls and sugar. When someone cooks tapioca pearls along with sugar that only make it worse, because tapioca is almost pure starch, it’s almost entirely made up of carbs and considerd as ‘empty’ calories due it’s lack protein and nutrients . When tapioca pearls are fried with sugar and hot water, the pearls can contain nearly 160 calories per ¼ cup serving. Beside that, the Bubble tea also served with sugary syrup flavor that means the average Bubble tea can easily reach a whopping 300 to 400 calories.

A study published in Food Science & Nutrition journal in 2017 explains that a 473 ml single serving of a Bubble tea with milk and tapioca “boba” balls contains 299 calories and 38 grams of sugar. This exceeds the maximum daily intake of sugar recommended amount by 250% and 384%, which can contribute to overweight, diabetes and heart disease. This is a public health concern because particularly Bubble tea also can increase the risk of both liver and heart diseases.

So, given the large amount of sugar in Bubble tea, it is best to enjoy this popular beverage in moderation as part of a diet low in sugar. What do you think about the Bubble tea effect? Are you still going to drink Bubble tea everyday?