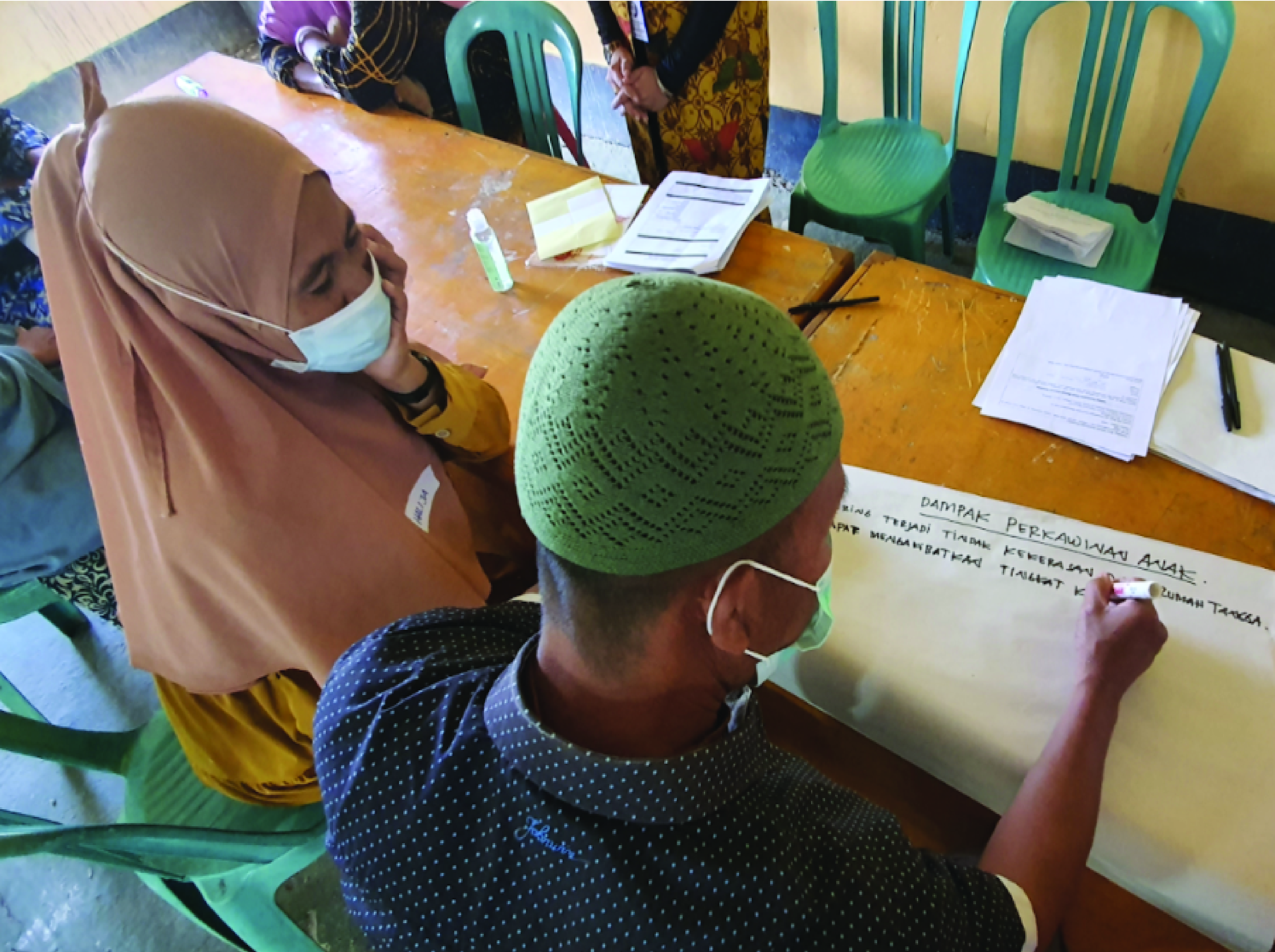 In April 2021, the Tulodo team conducted an endline study on child marriage prevention and menstrual health management in Bone, South Sulawesi. The aim was to measure the impacts of religious and community leaders’ engagement as part of the Better Reproductive Health and Rights for All in Indonesia (BERANI) Project. The BERANI project is funded by Global Affairs Canada (GAC), administered by UNICEF and UNFPA to support the Government of Indonesia. Communication materials, such as a religious lecture toolkit for ustadzah and a board game for adolescents plus their parents, were developed by Tulodo to help facilitate the process in interactive ways. In addition to these interventions, Lembaga Perlindungan Perempuan (LPP) Bone, a local NGO, also organised dialogue forums with the community and female religious leaders.

The endline study used a combination of qualitative and quantitative approaches to explore the behavioural determinants of child marriage among adolescents (13-15 years old), their parents, local stakeholders, and their local governments. We interviewed 500 parents who have at least a 13-15 years old child and 500 children aged 13-15 years old across eight districts of Bone, South Sulawesi. The data collection was done through the assistance of ten trained enumerators from Bone. We will compare the results of the endline with the baseline study done in 2019.

The data show some promising results, although a more robust analysis is still needed. Below are some qualitative findings we can share at this early stage

Knowing better: awareness of regulations and impacts of child marriage

In our quantitative study, we looked for insight into households’ knowledge regarding policies regarding the minimum age One component of the study is to measure whether there has been increased knowledge of child marriage regulations and impacts. We looked for insight into households’ knowledge regarding the minimum age for marriage by mentioning specific policies and their regulation’s attributes (number, year) of such policies. Our interviews showed a strong indication that there had been a positive change among parents, as depicted by a father from Lamuru:

“Yes, there was the new law 16/2019 to prevent child marriage by raising the minimum age to 19 years, but we must strengthen the dispensation method. In villages, some regulations are not strong enough. So the village head gives a signed statement to prevent parents whose children are 13-15 years old from marrying them off before they’re 19.”

Apart from policy awareness, we also recorded an increased number of parents, children, government officials, female religious leaders, educators and other community elements with an improved understanding of child marriage’s impacts. For example, most of them could identify how child marriage contributed to  increased domestic violence, risks of women’s and their children’s health, poverty, unemployment, and loss of study time.

“Child marriage has decreased and is no longer going up. It’s been two years since the BERANI program started preventing child marriage in Cumpiga. While the program was running, the 2019 law came into effect that prohibited children from marrying before the age of 19 years old.”

The role of parents and children is significant in making decisions to approve or decline the marriage of children in the household. In the baseline study, parents and grandparents were the family members who held decision-making authority to marry off their children. The practice was inseparable from the social belief that respectable mothers leave the formal decision-making to men but take responsibility for ensuring that a suitable proposal is accepted. Following this norm, a girl is decent when she agrees to the marriage decisions made by their parents. However, in the endline research, we found that the children’s considerations had become more involved in deciding to be married off or not.

We are still at the analysis stage to discover and validate how effective the BERANI program has been in preventing child marriage in Bone, South Sulawesi. We cannot wait to share more! We hope you continue to follow UNICEF Indonesia’s activities in the BERANI program.